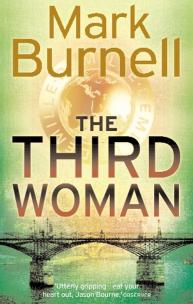 In a world where everyone and everything has its price, who do you trust? The Third Woman is a powerful and fascinating thriller following the adventures of Burnell’s unique heroine Stephanie Patrick. From conspiracy to terrorism, Vienna to Paris, will she find the truth?

The world isn't run by governments. It's run by corporations. In other words, everything and everyone has a price.

Stephanie Patrick operates under a number of names; Petra Reuter, known as a gun for hire, is probably the one she uses most frequently. She used to work for the government. Now she works for herself.

Robert Newman, who spends more nights at 35,000 feet than in his own bed, is an international troubleshooter. But twenty years at the top have still not purged for him the ghosts of the past.

A plea for help from an old friend draws Stephanie to Paris, where she narrowly survives a terrorist attack, an outrage that according to the authorities was masterminded by Petra Reuter. Betrayed in every way, pursued ruthlessly by a faceless enemy, her identity stolen from her, Stephanie seizes a hostage to give her a slim possibility of escape. But is the encounter with Robert Newman really just chance?

Hunted from Paris to Vienna, Stephanie and Newman are forced together to survive. Yet the more she learns, the closer Newman seems to be to the heart of the conspiracy. Stephanie becomes sure of only one thing: that the answers will lie with the person who she knows as The Third Woman.

‘The Third Woman’ is vividly contemporary, with a welcome return for a unique heroine