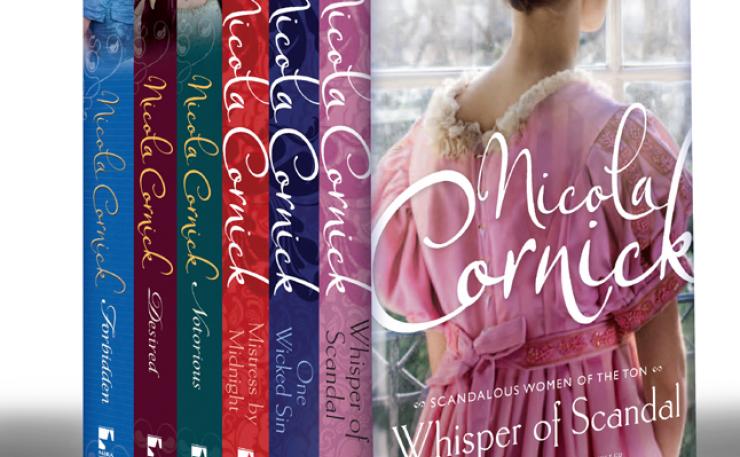 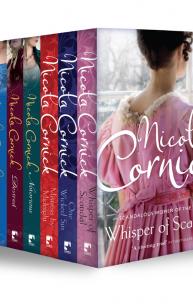 SINS AND SCANDALS COLLECTIONSix luscious Regency novels by international bestselling author Nicola Cornick. Enjoy the adventures of these Scandalous Women of the Ton!WHISPER OF SCANDAL“One whisper of scandal and a reputation dies…”London, May 1811 Widow Lady Joanna Ware has no desire to wed again but that doesn’t stop the flurry of suitors knocking on her door. Desperate to thwart another proposal, Joanna brazenly kisses Arctic dventurer Alex, Lord Grant. Joanna knows she’s just set the gossip mill turning.ONE WICKED SIN“I hired you as a novelty, an attraction, the most notorious woman in London…”London, July 1813 Once the toast of the ton, Lottie Cummings is now notorious for being divorced – and without a penny. Shunned by society the destitute beauty is forced to become a Covent Garden courtesan. Refusing to oblige her customers, Lottie’s about to be turned out onto the streets. Until a dangerous rake saves her with a scandalous offer.MISTRESS BY MIDNIGHT“To have one unfaithful wife could be construed as a misfortune. To have two would be worse than careless. ”London, November 1814Merryn Fenner is on a mission to ruin the Duke of Farne. A beautiful bluestocking with a penchant for justice, Merryn has waited ten years to satisfy her revenge against sensual, mysterious Garrick Northesk. Her family name had been tarnished at his hands, her life destroyed. And now she intends to return the favour – by finding the true heir to the duke’s title and disinheriting Garrick.NOTORIOUS'Devlin squared his shoulders and prepared to be introduced to the wife he had thought was dead.'London, June 1816 Dangerously seductive and sinfully beautiful, Susanna Burney is society’s most sought-after matchbreaker. Paid by wealthy parents to part unsuitable couples, she’s never yet failed. Until her final assignment brings her face to face with the man who’d once taught her an intimate lesson in heartache… James Devlin. Let the scandal of the season begin…DESIREDCovent Garden, London, October 1816 Tess Darent’s world is unravelling. Danger threatens her stepchildren and she is about to be unmasked as a radical political cartoonist and thrown into gaol. The only thing that can save her is a respectable marriage. But when it comes to tying the knot Tess requires a very special husband – one who has no desire to consummate their marriage… Owen Purchase, Viscount Rothbury cannot resist Tess when she asks for the protection of his name. But he has no intention of making a marriage in name only.FORBIDDENScandal isn't just for rogues, as the daring women in USA TODAY bestselling author Nicola Cornick's scintillating series prove…. As maid to some of the most wanton ladies of the ton, Margery Mallon lives within the boundaries of any sensible servant. Entanglements with gentlemen are taboo. Wild adventures are for the Gothic novels she secretly reads. Then an intriguing stranger named Mr. Ward offers her a taste of passion, and suddenly the wicked possibilities are too tempting to resist….