A Baby Changes Everything 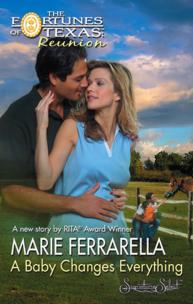 After five years of loving and honoring her husband, Savannah Perez worried that her marriage to Cruz was doomed. She loved him so much, but felt that his backbreaking devotion to their new ranch was ruining their relationship.Cruz Perez felt he had something to prove, so he pushed himself beyond his limits. He wanted the best for his wife and son, but tried to forget the pained looks they gave him when he returned home late at night. He knew he had to show his pregnant wife that she meant everything to him–before it was too late.