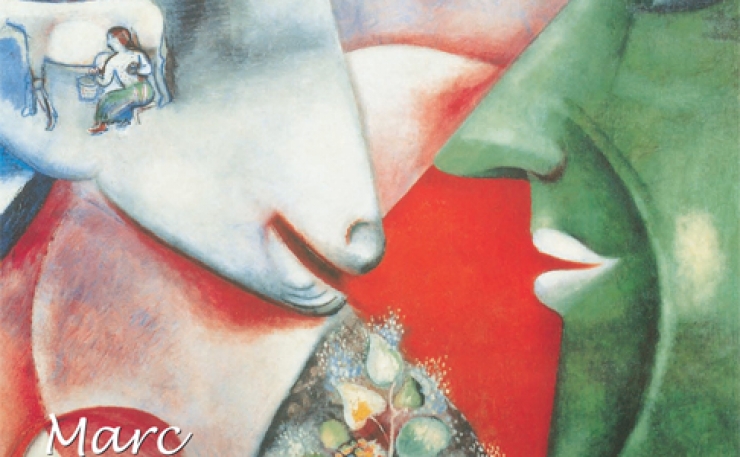 Marc Chagall was born into a strict Jewish family for whom the ban on representations of the human figure had the weight of dogma. A failure in the entrance examination for the Stieglitz School did not stop Chagall from later joining that famous school founded by the Imperial Society for the Encouragement of the Arts and directed by Nicholas Roerich. Chagall moved to Paris in 1910. The city was his “second Vitebsk”. At first, isolated in the little room on the Impasse du Maine at La Ruche, Chagall soon found numerous compatriots also attracted by the prestige of Paris: Lipchitz, Zadkine, Archipenko and Soutine, all of whom were to maintain the “smell” of his native land. From his very arrival Chagall wanted to “discover everything”. And to his dazzled eyes painting did indeed reveal itself. Even the most attentive and partial observer is at times unable to distinguish the “Parisian”, Chagall from the “Vitebskian”. The artist was not full of contradictions, nor was he a split personality, but he always remained different; he looked around and within himself and at the surrounding world, and he used his present thoughts and recollections. He had an utterly poetical mode of thought that enabled him to pursue such a complex course. Chagall was endowed with a sort of stylistic immunity: he enriched himself without destroying anything of his own inner structure. Admiring the works of others he studied them ingenuously, ridding himself of his youthful awkwardness, yet never losing his authenticity for a moment. At times Chagall seemed to look at the world through magic crystal – overloaded with artistic experimentation – of the Ecole de Paris. In such cases he would embark on a subtle and serious play with the various discoveries of the turn of the century and turned his prophetic gaze like that of a biblical youth, to look at himself ironically and thoughtfully in the mirror. Naturally, it totally and uneclectically reflected the painterly discoveries of C?zanne, the delicate inspiration of Modigliani, and the complex surface rhythms recalling the experiments of the early Cubists (See-Portrait at the Easel, 1914). Despite the analyses which nowadays illuminate the painter’s Judaeo-Russian sources, inherited or borrowed but always sublime, and his formal relationships, there is always some share of mystery in Chagall’s art. The mystery perhaps lies in the very nature of his art, in which he uses his experiences and memories. Painting truly is life, and perhaps life is painting.